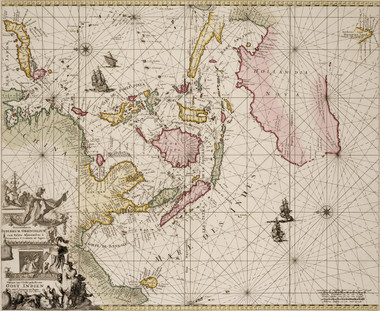 R. & J. Ottens' later edition of de Wit's Southeast Asia map first published in 1680, oriented North to the right, focuses on the Dutch sphere of interest in the region. This map is detailed as well as decorative and shows India, Indochina, China, Japan, the Philippines, what is modern-day Indonesia, and the still only partially charted coasts of Australia and New Guinea. Decorations include sailing ships, compass roses and a title cartouche in the shape of a pagoda features a Chinese princess, a Chinese merchant and a variety of Chinese products. This classic format of Tasman discoveries in Hollandia Nova was still popular enough for the Ottens brothers to re-issue in 1745. Copy of de Wit's 1680 map with Anthony van Diemen's Land added. De Wit, in turn, copied Goos 1666. North oriented to the left.