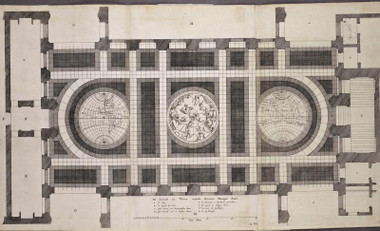 A bird’s-eye view of the floor design of the Amsterdam Town Hall in the second half of the 17th century, showing the one of earliest public depictions of Tasman’s discoveries on the Australian continent. The marble mosaic map was laid in 1648 but was later removed as traffic across the floor gradually damaged the design. It depicts the two hemispheres and a celestial chart of the Northern Hemisphere.

The floor inspired the magnificent Tasman Map floor mosaic in the vestibule of the Mitchell building.