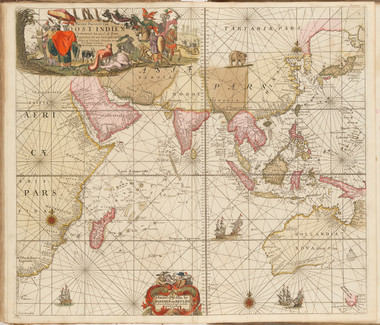 An atlas is a collection of maps, with the same dimensions and design, engraved specifically for publication with related text. Gerard Mercator coined the word ‘atlas’ although he did not publish the first atlas. One of the most lavish series of maritime atlases was produced by the van Keulen family in the second half of the 17th century and into the early 18th century. These multi-volume atlases included detailed charts of the known world, engraved, lavishly decorated and often hand-coloured.

This new edition of De nieuwe groote lichtende zee-fakkel was published in six parts between 1714 and 1753 and bound in two volumes. The famous chart of the East Indies on display includes a detailed cartouche depicting the gruesome decapitation of a prisoner.