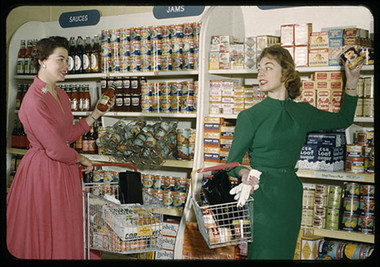 The mid 1950s saw the rise of 'self-selection' or self-service grocery stores and by late 1957, the Four-Square cooperative chain, with nearly 2000 stores throughout Australasia, was established in NSW. During 1957, self-service stores increased from 1707 nationwide at the beginning of the year to 2126 twelve months later, including 105 new stores built specifically for self-service. These models, 'shopping' at one of Broadhurst & Barcham's 10 self-service grocery stores, are posed for an advertising promotion. At that time, the shopping trolley was a novelty, frozen food was an idea and television advertising had just begun.