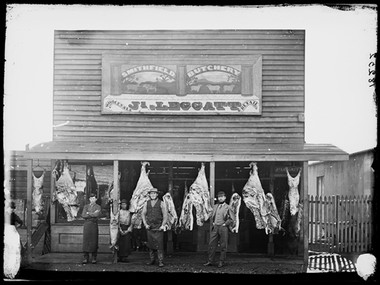 The motto of James Leggatt's Smithfield Butchery was 'down with the monopoly and feed the hungry'. His advertising proclaimed his beef was 'from the best herds in the Western districts', his mutton was 'from the choicest flocks in the colony', his pork was 'warranted dairy fed' and his lamb was 'raised especially to his order'. He opened a branch store in Home Rule at the start of the rush in June 1872 and had delivery carts supplying meat to the goldfields. Meat was 4d a pound [just over 7 cents per kg], roughly twice that in Sydney.