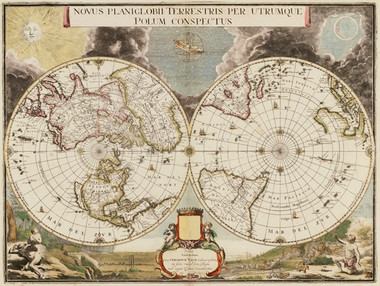 Erased signature of Joan Blaeu can be discerned beneath Valck's imprint.

The cartouche with the imprint and the shield above it have vorne a previous inscription and insignia now imperfectly erased. Still visible are Galliarium ... Regis ... tab. hanc D.D., followed by a signature which appears to be G. Bleau. W. J. Bleau died 1638, while this map shows the discoveries of Tasman's voyages 1642-4 but these could easily have been later additions, or the map done by one of his descendants. A map of this title was published in G. Valck and P. Schenk, Atlas Sylloge Compendiosa, 1709.