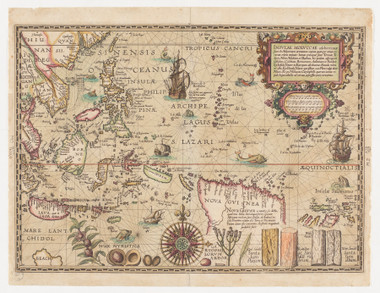 Known as the Spice Map, Petrus Plancius' highly decorative map depicts the Maluku Islands (or the Moluccas). Until the 1700s they were the world's main producers of nutmeg, cloves and mace, and so were commonly known as the Spice Islands. The lucrative potential of the spice trade attracted the interest of a number of European powers, with the Portuguese being the first of them to establish dominance. Advocating for a Dutch presence in the region, Plancius compiled this map using covertly obtained Portuguese charts. Illustrations of nutmeg, cloves and sandalwood have been included at the bottom of the map to provide an enticing glimpse of the trading possibilities the region held. It foreshadows the establishment of a brutal Dutch monopoly in the area.