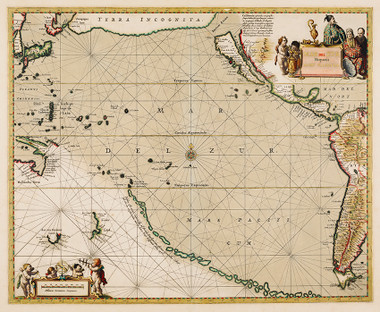 Early map of the Pacific Ocean and is the first state of this famous map, without the addition of Staten Land, Antony van Diemens Land, or the northern coastline of Holland Nova. It is the first map of the Pacific to appear in a Dutch atlas and the earliest to show California as a large island off the west coast of North America. Mare Vermio [i.e. lit. Sea of Vermillion Sea, or Sea of Cortez and now Gulf of California] is showns as a strait situated between California and North America. Note that text is included about California to the left of the title cartouche. The west coast of both American continents is heavily annotated place names. A large area called Terra Incognita is separated from California by Fretum Anian [i.e. Strait of Anian]. The map includes a Pacific Islands chain annotated with descriptive text, attributing them to explorer Hernand Galego in 1578, runs northwest from the tip of South America to Tropicus Capricorni. Other notable features include Islas de Ladrones [Marianas Islands], Iapan [i.e. Japan], New Guinea conjoined with the Gulf of Carpentaria, recently discovered by the Dutch. The chart is centered on a compass rose with rhumb lines and other decorative features include a title cartouche (upper right), which is surrounded by Asian figures and cherubs and scale cartouche (lower left) surrounded by 4 putti playing with navigational instruments including a sphere of the earth. Relief is shown pictorially.
Hand coloured map decorated with gold leaf.
Rev. version of Jansson map originally published 1650.
Scale in Milliaria Germanica Communia.