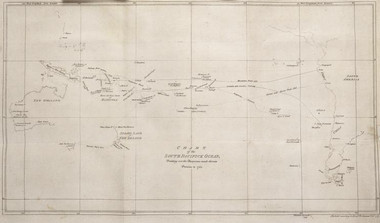 Chart of the South Pacific Ocean, pointing out the discoveries made therein previous to 1764

Just outside the neatline and border and next to the publishing statement "Theodore Gerrards 1599". In: An historical collection of the several voyages and discoveries in the South Pacific Ocean by Alexander Dalrymple Esq. Dalrymple mentions Gerards or Gerrards as one of the first Dutch who attempted to voyage into the South Sea; as one of the fleet in the voyage wherein W. Adams was pilot, being carried by tempests in 64 Deg. S. in that height, observing that "the country was mountainous and covered with snow, looking like Norway, and seemed to extend towards the Islands of Salomon".