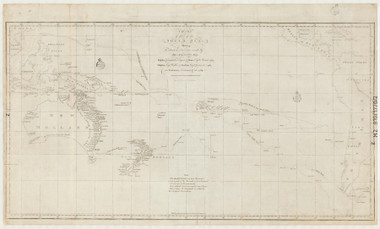 Chart of part of the South Sea, shewing the tracts & discoveries made by His Majestys ships Dolphin,…1773

Chart of part of the South Sea, showing the tracks and discoveries made by His Majestys ships Dolphin, Commodore Byron and Tamar, Captain Mouat, 1765, Dolphin, Captain Wallis, and Swallow, Captain Carteret, 1767, and Endeavour, Lieutenant Cook, 1769.

The first edition of the chart produced by James Cook and engraved by William Whitchurch for the official account of the Cook’s first voyage published by John Hawksworth in 1773. Cook’s route across the South Pacific from Cape Horn to New Zealand and Australia is marked. The chart was the inspiration for the engraving on the silver punchbowl believed to have been commissioned by Sir Joseph Banks to commemorate the voyage.