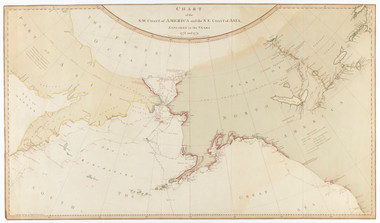 Map of the coasts of North West America and North East Asia showing Cook's track in 1778 and 1779 with relief shown by bathymetric soundings and pictorially. Notes on 'Indians' and Samuel Hearne's overland track across northern Canada to the Arctic ocean 1771-1772.
Commissioned for, but not included in, the final publication of Cook's journals. This 'Palmer' version, championed by Captain James King and John Douglas, was published by Faden on July 24, 1784, a month after the publication of the official version with the map engraved by T. Harmar which was favoured by the editors Dalrymple and Banks.
With ex libris of James Edge Partington on the covers, it is bound with the rare 'A new chart of the world exhibiting the whole of the discoveries made by the late Captain James Cook F.R.S. with the tracks of the ships under his command; also those of Cap.n Phipps (now Lord Mulgrave) in his expedition to the North Pole', published January 1st, 1787 by W.m Faden.
Also bound in is 'A chart of the world according to Mercators projection, shewing the latest discoveries of Capt. Cook' [W.m Faden 1789].