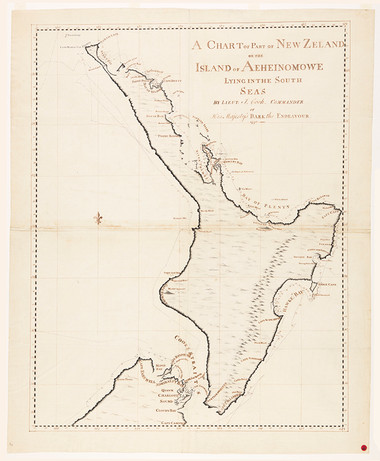 A chart of part of New Zeland of the Island of Aeheinomowe, lying in the South Seas, 1770

Manuscript nautical chart of the North Island of New Zealand, prepared during James Cook's first voyage, 1768-1771. The map is accompanied with another of the South Island, 'Chart of part of New Zeland or the Island of Tovypoenammu, lying in the South Sea '.
This map is considered to have a companion chart in 'Chart of part of New Zeland or the island of Tovypoenammu' i.e. South Island. However, the two maps are imperfectly matched and appear to be "drafted, at least in part, by different hands", (Mitchell Library Shelf list card). Of note, the part of the South Island that appears on this chart differs in details of the coastline and the spelling of place names. Taken together the charts differ from 'A Chart of New Zealand or the islands of Aeheinomouwe and Tovypoenammu ... by Lieutenant J. Cook', currently held at the British Library, (Additional MS 7085.17). Notably, the British Library map (Additional MS 7085.17) shows both islands on one sheet, and the present charts (SAFE / DLSPENCER / 166) include details omitted from the former. For example, this chart shows Cavalle Head and Bushey Point. Further, False Bay (possibly Kaipara Harbour) and Desert Coast (drawn along Te Oneroa-a-Tōhē / Ninety Mile Beach) are shown on the British Library chart, but not on the present chart. Of the South Island companion chart, other details are changed when compared to the British Library chart (Additional MS 7085.17). For example, in the South Island chart the wording of West Cape, South and Molyneux Bay, (written as Molineux's Bay) varies. In the South Island chart, the appearance of Molyneux Bay, and the coastline directly around it differs to the British Library chart at Additional MS 7085.17, but is similar in appearance to another chart held by the British Libary of the same name, specifically at Additional MS 7085.16. In correspondence between A. H. Spencer and Sir William Dixon regarding the 1938 purchase of the charts it is stated by Spencer, that "the British Museum possesses a set of these charts in the volume known as The (Sir Joseph) Banks Papers. They also possess another separate chart of the North Island. I am submitting a set to you, so it means that Cook made three sets; of which there are known to exist two and a half sets ... I spent days at the British Museum comparing the five charts and established beyond question that each one is the work of Cook's own hand. Their man in the manuscript chart room agrees with me". Sources: Cameron-Ash, M 'Political Captain Cook' in Journal of the Australian and New Zealand Map Society ; Beaglehole, J.C. 'Journals of Captain James Cook on his voyages of discovery', (1955-1974) ; Mitchell Library, 'William Dixson Correspondence File Spencer' (19 February 1938).