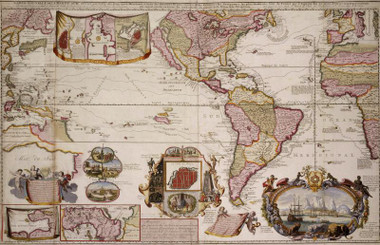 This highly decorative map highlights the continent of North and South America, featuring California as an island, as well as the Pacific and the Atlantic oceans. It also includes Nouvelle Hollande [i.e. Australia] and Nouvelle Guinea [i.e. New Guinea], both distortedly represented, with a portion of South-East as well as the west coast of Africa.

In particular, note that the 'solomon Islands' are depicted next to Carpentaria which extends into Terre de Quir and joins 'Nouvelle Zelande'. The sea tracks of explorers are included.

The map also includes many vignettes, annotations and some insets. Relief is shown pictorially. Includes text and ill.

Explanatory text in Latin at bottom left of map: Nova Maris Pacifici Tabula ... . Explanatory text in Dutch at bottom right of centre on map: Nieuwe Kaart van de Zuyd Zee ... . Decorative features include: Cartouche decorated with a lion, a leopard, a fox and monkeys at bottom right hand corner of map, showing the settlement of Cape Town and its shipping -- Decorative cartouche at centre bottom of map showing the religious practices of Indians in Mexico -- Vignette of native life in the French Islands. Prime meridian: Ferro.