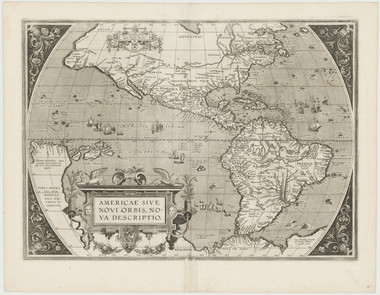 Map of the Americas, Mer Pacifico [i.e. Pacific Ocean], Mer Atlantica [i.e. Atlantic Ocean] with Nova Guinea [i.e. New Guinea] and Terra del Fuego as part of unknown Southern Land published in the first modern atlas, Abraham Ortelius' Theatrum orbis terrarum in 1570 and its subsequent editions. This map is considered historically significant because Ortelius provided a popular and fairly accurate image of the Americas as the brave New World that the West would pioneer and tame. The New World is heavily annotated with place-names documenting Ponce de Leon's penetration of the Southeast in 1521, the Gulf coast explorations of Navaez in 1521 and Cabeza de Vaca in 1528, as well as de Soto's expedition in 1539 combined with information from Cortes in Mexico, Franciscan Fr. de Nizza in the Southwest, and Cabrillo along the California coast in 1542. Decorative features include a border at the corners of the map as well as a cartouche framing the title. Relief is shown pictorially.