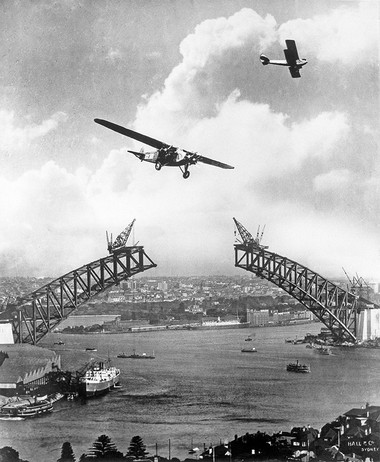 This image of the Avro-10 Southern Sun, flying over the arches of the Sydney Harbour Bridge, is a montage by Edward Searle, who worked for Hall & Co.

It celebrated the arrival in Sydney of pioneer aviatrix Amy Johnson, the first woman to fly solo from England to Australia. Unfortunately, she had crash-landed her De Havilland Gypsy Moth in Brisbane and was flown to Sydney by Charles Ulm in the Southern Sun.

In this montage, the wheels of the tri-motor are flattened on the bottom and its propellers stationary, showing that it was photographed while parked on the tarmac.