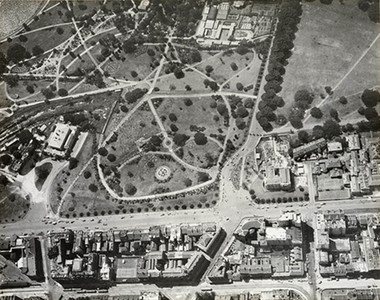 Brothers Ross and Keith Smith, together with mechanics Jim Bennett and Wally Shiers, won the 1919 England-to-Australia air race, flying a Vickers Vimy bomber with the registration number G-EAOU (God 'elp All Of Us). Frank Hurley, who had photographed and flown with Captain Ross Smith and the Australian Flying Corps during the war, joined them in Charleville for the leg to Sydney. Hurley filmed the flight and took aerial photographs using a panoramic camera and a 5 x 4 inch (13 x 10 cm) camera. He published 27 'Aeroviews', including this one, and sold enlargements to the public for 42 shillings ($4.20), complete with the aviators' signatures.