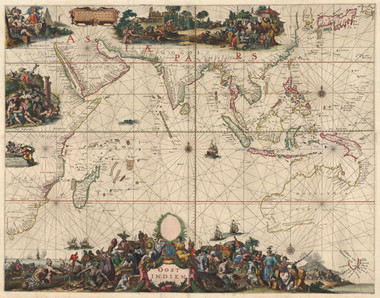 This map depicts the trading territory of the Dutch East India Company (VOC) in the mid 17th century and the inclusion of Dutch discoveries in Australia.

The map shows rivers, lakes, islands, mountains, Dutch discoveries in Australia, illustrations of indigenous people in traditional dress and ships. At the foot of the map is a shield bearing the coat of arms for the House of Bourbon and Kingdom of Spain.

Huych Allardt was the founder of the family of map makers, publishers and print sellers in Amsterdam. He is the publisher of the large "India quae Orientalis dicitur, et insulae adiacentes, t'Amsterdam, Gedruckt bij Huych Allardt, inde Kalverstraat inde Werelt-kaart".

The chart is lavishly decorated and signed by Romeyn de Hooghe, an important Dutch Baroque artist and engraver.