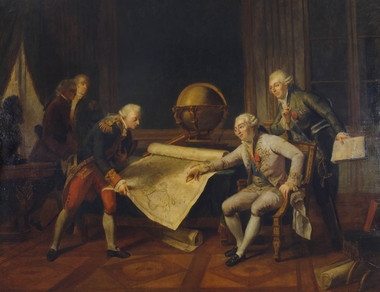 After returning from his appointment as NSW Commissioner for the 1908 Franco–British Exhibition in London, Sir Joseph Carruthers, suggested at a meeting of the Art Gallery of New South Wale’s board in September 1908 from his position as Trustee that ‘NSW should request a loan of the famous La Pérouse picture’, painted by Nicolas-Andre Monsiau in 1817, and held in the Royal Palace at Versailles, France.
A request was made to the French consul in Sydney via the Premier’s office. Gallery minutes from May 1910 record that the French Government would not lend the painting and normally did not permit copies to be made, but were ‘in this special case, prepared to have a reproduction made by a competent artist’.
The Gallery’s London agent, F Graham Lloyd, was asked to broker an agreement with the French Government. Lloyd met their Consul-General in London in October and was told it could take over a year before the copy could be started as it would need to go through the Ministries of Foreign Affairs, Finance and Beaux-Arts. Since the French government would appoint Edouard Nuel to paint the copy, the Consul-General advised Lloyd to approach Nuel directly to save time. Lloyd did and agreed a price of £25. In February 1911, Nuel reported that the painting was nearing completion. Lloyd arranged for noted Parisian art critic Marius Vachon to inspect the work. ‘I certify that the copy is a faithful reproduction of the original,’ Vachon reported, ‘… with all its qualities and also with all its faults.’ By the time the Art Gallery received the painting, in July 1911, it had started to redefine the scope of its collection and move works considered to have more historical interest than artistic merit to other institutions in Sydney. In June 1912, the Trustees decided to transfer the painting to the Mitchell Library.