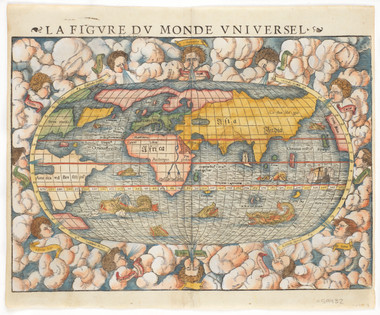 Double page World map, being plate 1 taken from a French edition of Sebastian Munster's Cosmographia, published post-humously under the direction of Munster's stepson, Heinrich Petri. The map is of the second manifestation of Munster's 'Typus Orbis Universalis' as recut by David Kandel in 1550, whose mark can be seen in the lower left corner of the sheet. The map serves as a indication as to the extent of European knowlegde of the world during the sixteenth century. The map shows the influence of the European explorers who reported evidence of a north-west passage from the Atlantic to Asia. For example, the North American continent 'Terra Florida' is drawn, somewhat malformed and divided, set below a wide strait indicating a passage through to the Pacific, which is argued to the St Lawrence river. Lacking in this manifestation are numerous banners of text, found in the earlier woodcut, among them the text formerly set above the North American Continent, 'Per hoc fretu iter pater ad Molucas', further indicating the belief in a northern Atlantic route to Asia. The map shows Terra del Fuego separated from the South American continent by Magellan's Strait, however, the island is greatly exaggerated in size, thus illustrating the continuing belief in the existence of a great continental mass in the Southern Hemisphere. As with its previous manifestation, within the approximate location of Australia are the mythical islands of Grisonum and Calensuan. Africa is shown as a discrete continent, with a prominent river Nile drawn originating from a group of mountains in the southern part of the continent. Greenland and Canada are shown joined together in an unnamed landmass (formerly named as 'Terra Nova sive Bacalhos' within the earlier manifestation of the map). When compared to its earlier state, in this manifestation the map has additional sea monsters throughout and is set within a broader oval border, which is adorned with clouds and redrawn wind heads, named within banners.