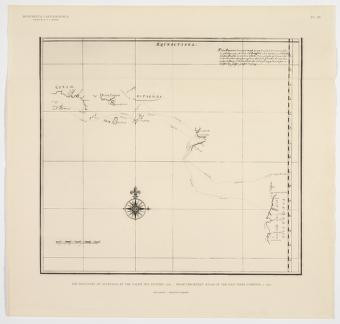 This map shows the route taken by the pinnace Duifien on the outward as well as on the return voyage when she visited the countries east of Banda up to New Guinea. The Duyfken made landfall in 1606 at "R. met het Bosch", the present Pennefather River.

In 1605 the Duyfken sailed from Batavia, visited Aru, sailed along the coast of New Guinea and reached Cape Keer Weer in the Gulf of Carpentaria.