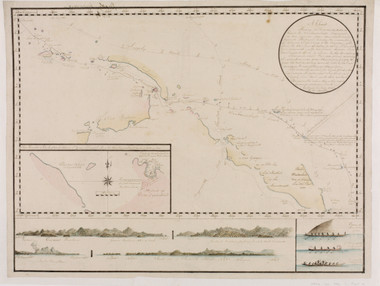 Although 'Norfolk Island' inscribed 'W. Bradley delin. 1788' was published in the 'Voyage of Governor Phillip to Botany Bay' 1789, Bradley first saw Norfolk Island after the loss of the Sirius there on 19th March 1790, and the survey was by King and Ball in the Supply. Bradley's own survey of the island was published 21st Dec. 1792 by John Stockdale and included in Hunter's 'Journal of Transactions'. Finally, 'A chart of Norfolk Island from an actual survey by Capt.n Will.m Bradley RN' was published by himself on 10th Oct. 1794 upon promotion to post captain; this was republished by the Hydrographic Office [chart no. 1110] as late as May 1823.