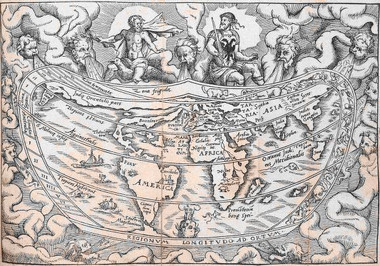 Wood engraving of Gemma Frisius' world map "with names and natures of the winds".

On the cordiform projection of Apianus, this issue is from the 1548 Spanish translation of Peter Apian's Cosmographia, based on 1545 Latin edition.

Nordenskioeld dryly notes this "worthless map of Gemma Frisius, which, however, was much admired and often reproduced in the 16th century" - while reproducing it in his Facsimile Atlas. Main emphasis on winds and climatic zones; the south polar portion of this otherwise heart-shaped projection is truncated.