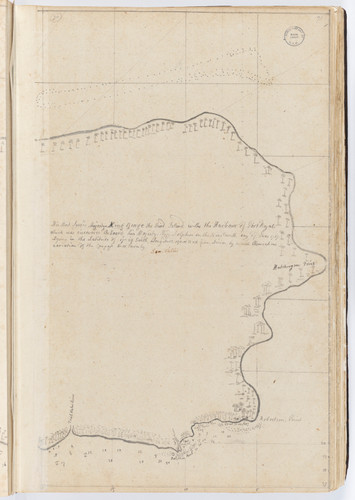 Tahiti by Samuel Wallis, sketches bound within 'The English pilot'. Right side.

Map from 'The English pilot'. The third book, Describing the sea-coasts, capes, head-land, streights, soundings, sands, shoals, rocks and dangers, the islands, bays, roads, harbours and ports in the oriental navigation .../ collected for the general benefit of our own countrymen.
Besides the main maps, there are several small insets in the text, together with numerous silhouettes of coastal features.
The Library of Congress list the 39 maps contained in the 1716 ed. This ed. contains titles with no equivalent in the 1716 ed.; namely maps 20,30,31 and 34. Maps 1-3, 6,8 and 9 cover a similiar area but the titles differ in varying degrees.
The text of this volume is by John Seller, but in this ed. no author is given. Most of the maps, especially those of large regions, appear to be crude copies or translations of Dutch charts, apparently those of J. van Keulen. These were done by John Seller and Samuel Thornton but in this ed. the cartographer's name has usually been erased from the plate.