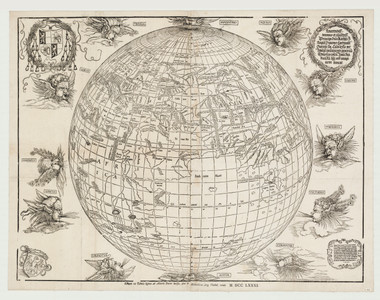 This map is believed to be the first attempt at depicting the world as a two-dimensional sphere. The cartography is the work of Johannes Stabius, the court mathematician to Emperor Maximilian I, with the engraving and artistic elements, including the 12 detailed wind heads, produced by Albrecht Durer. No known copies exist of the 1515 impression. This rare copy was produced from the original 1515 woodblocks which were rediscovered in 1781. It was printed by Adam von Bartsch on two sheets of paper watermarked with a crest depicting a wolf, for Wolfegg, the town in Ravensburg, Germany, where the paper was manufactured.