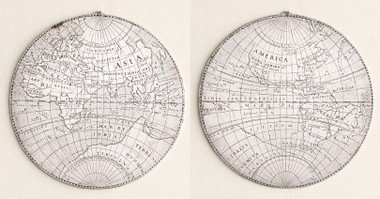 Image shows obverse and reverse sides of same medal commemorating Sir Francis Drake's circumnavigation of the earth and widely known as as the Drake silver medal or map. Mounted loosely on a turquoise velvet lined frame, 13.9 x 16.1 cm, an ivory plaque is mounted on the velvet. Accompanied by hand printed booklet titled 'Voyage of Sir Francis Drake' produced by Spink and Son, and two letters dated 1923 relating to the authenticity of the medal.

Michael Mercator, cartographer and engraver, was born between 1565 and 1570, and was the grandson of Gerard Mercator. Little is known of his career however it is known that he engraved a world map which appeared in the 1595 edition of Mercator's Atlas. Poll tax returns show that Mercator was in London in 1590, being assessed in June of that year as 'servaunte to Baptista ...' of 'St. Bennet Finckes Paroche'.

Obverse: Eastern hemisphere, including ‘Terra Australis numdum cognita’. Drake’s route is shown by a dotted line on which are the following inscriptions: at the start of the outward route is ‘Exitus Draci’ (Drake departs); near the Cape of Good Hope is ‘Reditus’ (return), following that is a sailing ship. Many place names are inscribed, as are the Equator, Tropics of Cancer and Capricorn, and the Arctic and Antarctic circles.

Reverse: Western hemisphere, showing ‘No. Guinea’ as part of ‘Terra Australis…’. The dotted line showing Drake’s route is continued from the obverse with the following inscriptions: ‘D.F. Fra exitus anno. 1577 id Dece’ (Sir Francis Drake’s departure in 1577 on the Ides of December, i.e. 13 December); ‘Reditus anno 1580, 4 Cal Oc’ (Return in the year 1580, on the 4th of the calends of October, i.e. 28 September); near the southern tip of South America is ‘In R. Elisabetae 1579 ab Anglij’ (by the English reign of Elizabeth, 1579); in North America ‘Nova Albion ab Anglie 1580 inuenta’ (New Albion discovered by the English, 1580) and ‘Meta incognita inuenta ab Anglie 1576’ (Meta incognita discovered by the English, 1576) and ‘Bacallaos ab Aug 1490’ (Bacallaos by the English, 1490). Sailing ships are inscribed at two points along the route, many place names are inscribed as are the Equator, Tropics of Capricorn and Cancer, Arctic and Antarctic circles.