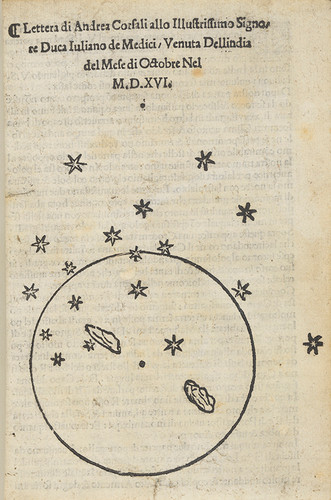 Printed copy of a letter sent from Andrea Corsali to his patron Giuliano de Medici in 1516. In the letter, Corsali describes a Portuguese sea voyage which sailed from Lisbon to India. The voyage rounded the Cape of Good Hope where Corsali observed the Southern Cross constellation for the first time. Corsali’s extensive description and diagram of the Southern Cross is one of the earliest appearances of this constellation in print. Corsali’s letter was received by the Medici in October 1516 and published in December 1516.

Andrea Corsali was born in 1487 in the village of Monteboro di Empoli, Republic of Florence, and his name appears on the baptismal register of the Cathedral of Florence. In 1515, when Corsali was 28, his patron Giuliano de Medici sent him on a mission to India. Corsali joined a Portuguese caravel in Lisbon, which sailed around the Cape of Good Hope to India. In January 1516, he wrote to his patron about where he had sailed and what he had observed.