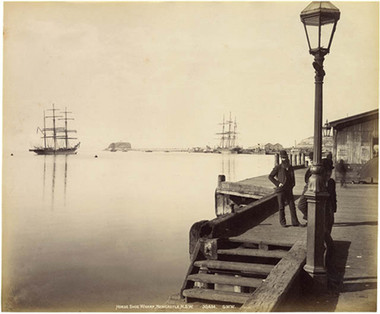 In 1892, George Washington Wilson & Co. of Aberdeen, Scotland - the largest view company in the world - sent photographer Fred Hardie to Australia to add to their image stock of exotic places. With two cameras, he took at least 500 large-format views along the coast from Adelaide to Cairns and a series on Australian Aboriginal peoples.

Among the scenic images, Hardie took 21 photographs in the Newcastle area, including several views of Nobbys Head, at the entrance to Newcastle Harbour. His antics in taking this unusual view from Horse Shoe Wharf along Macquarie Pier obviously intrigued some of the locals.