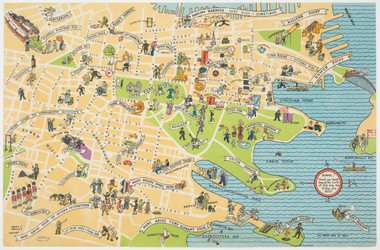 Greetings from the Heart of Sydney is a pictorial map, an artistic style of cartography that flourished in the mid-20th century. Pictorial maps use illustrations to animate geography and evoke a sense of place, often swerving away from technical accuracy in representing scale and distance. Rarely produced by trained cartographers, they were usually created by artists and commercial illustrators for purposes such as marketing, propaganda, promoting travel and tourism and commemorating historical events.

Although they were often mass-produced, pictorial maps can be incredibly rare today for a couple of reasons. They were usually printed on brochures, posters, menus and other printed material that was destined to be thrown away. And because of their artistic and irreverent nature, they haven’t always been recognised as significant maps worthy of study and preservation, unlike their authorised and accurately measured counterparts.

So it’s perhaps unsurprising that Greetings from the Heart of Sydney hasn’t made its way into a public collection until now. Designed as a souvenir map to be mailed to a loved one (much like a postcard), copies would have been sent and eventually discarded. A certain self-awareness of its own frivolity is demonstrated with these words printed on the reverse side: ‘May the little bits of nonsense scattered on this chart, be a cheerful token of the greeting from my heart.’ Even so, looking at it more than half a century after it was printed, and acknowledging that the map is very much of its time in terms of the representation of different cultures, these ‘little bits of nonsense’ present a vibrant and enthralling snapshot of mid-20th century Sydney, capturing many long-vanished city institutions.

Its creator, the commercial artist, illustrator, and cartoonist Harry J Weston, included dozens of illustrations on the map to represent shops, buildings and landmarks. These include a teapot for the Bushell’s Tea building, a snowman standing in for Snow’s Emporium, an hourglass for the John Sands building, a farmer at the Farmer & Co department store on Pitt Street Mall, a bull and a bear at the Sydney Stock Exchange and barrels to mark many of the city’s pubs. The legendary 1908 boxing day fight between Jack Johnson and Tommy Burns is depicted at the site of Sydney Stadium at Rushcutters Bay. It’s especially pleasing to see the Mitchell Library marked with an open book.

Although the map is undated, its content provides some hints to its age. The inclusion of the Captain Cook Graving Dock at Garden Island indicates the map was created after the dock opened in 1945. As Weston died in 1955, that gives a 10-year window for the date of the map.