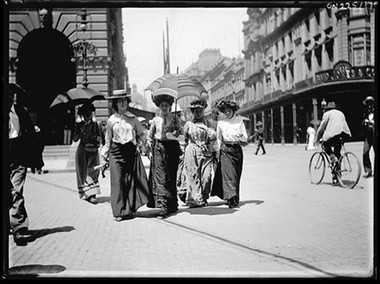 Frederick Danvers Power was a mining engineer who immigrated to Australia from England in 1895. He had a detective camera, which he used to record city life, and snapped these women crossing Martin Place at George Street, with the Post Office behind them. This image gives us a more accurate idea than formal studio photographs or magazine illustrations of what women actually wore. People wore their best outfit to the portrait studio, and parasols and hats, which shaded the face, were not permitted. On the other hand, the idealised renditions of fashion published in magazines show neither creased clothes nor worn shoes.