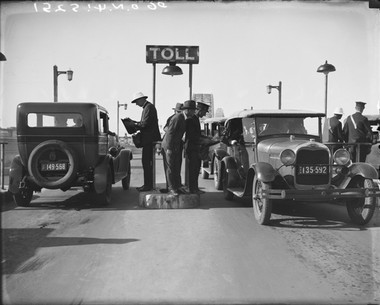 The Harbour Bridge opened to traffic at midnight on 19 March 1932. Remarkably, the queue on the southern side extended past Sydney Town Hall, and on the North Sydney side was a mile (1.6 kilometres) long. The toll was steep at sixpence per car and driver, plus threepence for each adult and a penny for each child, but this did not seem to deter motorists. Their main complaint was the electric shock they received from toll collectors when they paid. Dr J.J. Bradfield, the Bridge's designer, suggested collectors should wear boots with crepe rubber soles to prevent electrical groundings. The toll collector's comfort was overlooked in the grand design and booths were not erected until six months after the bridge had opened.