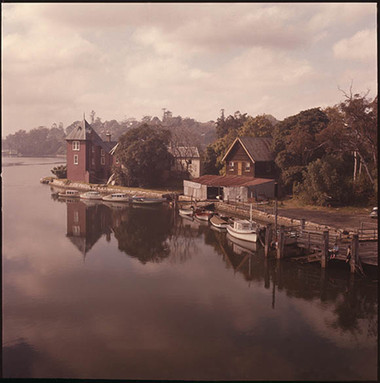 This tranquil scene on the Lane Cove River at Hunters Hill was utterly destroyed by completion of the new Fig Tree Bridge in 1963, which went straight through the centre of this image. The bridge was originally planned to form part of a north-western expressway, which was never built. Fortunately, Fig Tree House, with its distinctive timber tower, remains. Originally owned by convict businesswoman Mary Reiby, Fig Tree Farm was later bought by Didier Joubert, and his son added the tower. Douglass Baglin, who produced many photographic books on Australia, lived nearby and recorded this scene from an earlier bridge to the west.