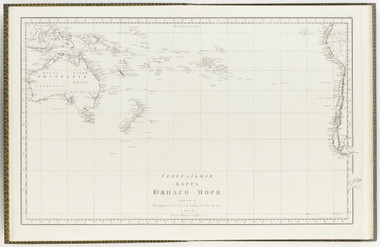 One of the maps in an Atlas documenting the South Pacific region following the world-wide expedition undertaken by the Russian explorer Ivan Kruzenshtern in 1803-1806. This included a systematic charting of the Pacific region including a study of the natives in the Marquesas as well as establishing open trade in furs between the Russian settlements in Canton, China and Alaska. The atlas itself constitutes the first published systematic cartographic survey of the islands of the South Pacific. The maps cover Australasia and South Pacific island groups such as the Solomon Islands, Vanuatu and the Fijian islands. A companion volume in Russian covering the North Pacific may have also been issued but has never been verified due to its rarity.