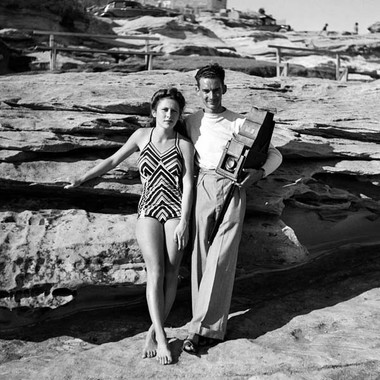 George Caddy was often photographed with his models. This is thought to be Pat McRae, who had appeared in Truth newspaper the previous month, wearing this laced-up Canadian swimsuit. George’s camera is a rather unwieldy, large-format Graflex, with fold-up tripod. To set the shutter speed, the Graflex owner wound up the shutter to one of a series of tensions. Then he selected the shutter slit width with another knob, using a table on the side of the camera, which gave the speed for each combination. But at least someone with a Graflex looked like a professional photographer!